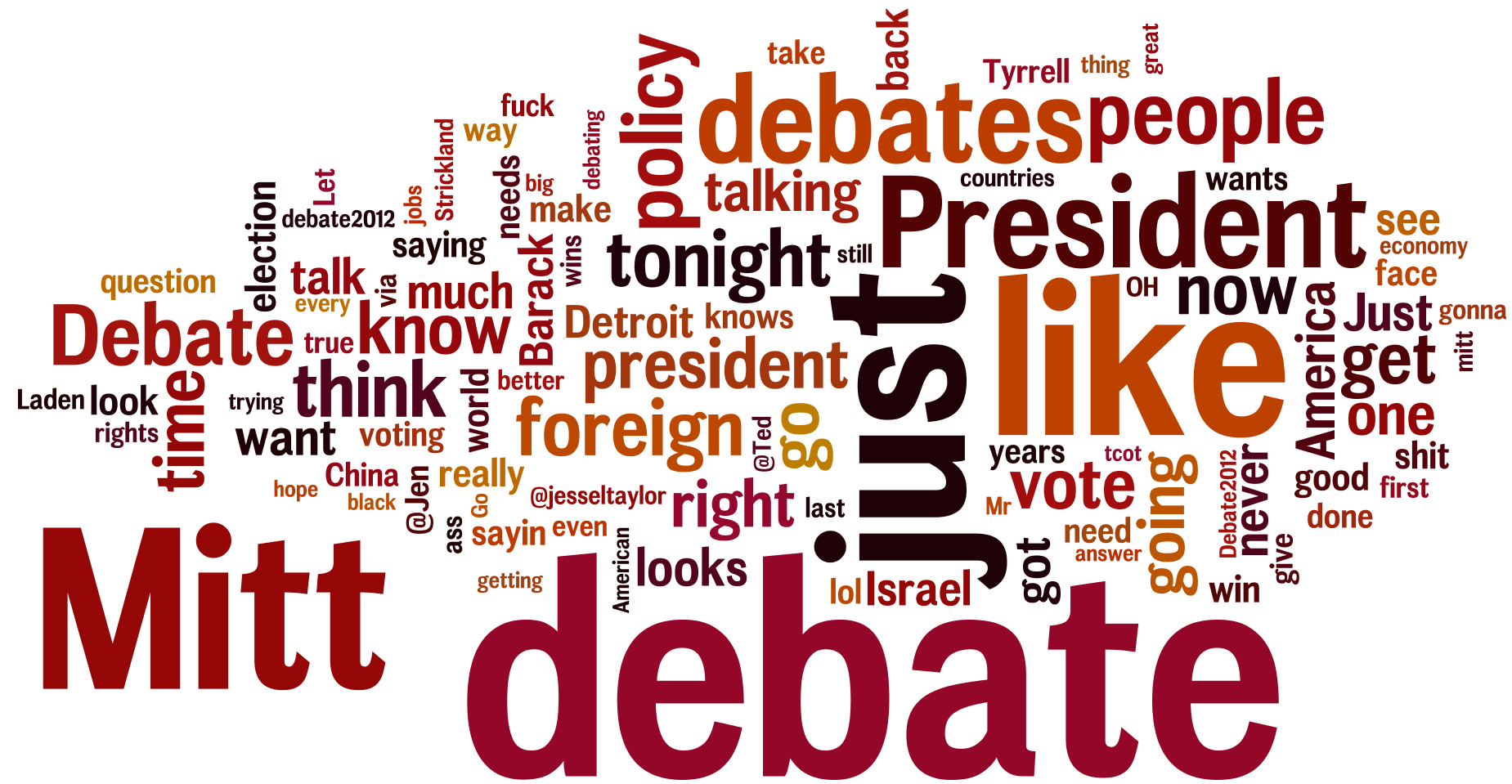 The third and final debate is in the books and compared to the first and second debates, the conversation was less active. Perhaps competing against Monday Night Football and game 7 of the NLCS distracted Twitter users, or perhaps voters have made their decisions as 95% of Ohioans report.

We crunched the data on Twitter from Iowa and Ohio to track how or if the debate changed the tone and size of the online conversation about Obama and Romney. Here’s what we found:

The pre-debate hype was toned down before the third debate with 15,835 tweets in Ohio mentioning Romney or Obama. This was down over 4000 tweets from the 19,564 tweets before the second debate.

As before the second debate, Obama won the war of mentions being mentioned 10,660 times versus Romney’s 8,657 mentions. Mitt was also mentioned 1872 times helping to increase his visibility. Interestingly this was in contrast to Iowa where Romney surged to the lead. Is it a sign of a bigger swing or bigger excitement in Iowa ahead of the election?

In Ohio, a new set of Twitter users dominated the conversation. @MeratFred lead the way with 263 tweets while Miller51550, XAFCOP and Cle054123 were also active before the debate.

Romney says we #CantAfford4More years of Obama, but that’s not true; we can’t elect a man that changes positions like most change underwear.

Representative and former governor @Ted_Strickland carried his offline klout to the online world ahead of the debate with the second most retweeted tweet:

In the 24 hours before the debate, the conversation decreased compared to the second and first debate. With 4298 tweets mentioning “Romney” or “Obama”, it was a dramatic 22% decline in conversations online.

In a reverse from the second debate, Romney dominated in Iowa with 2935 mentions compared to Obama’s 2245. In the first two debates, Obama enjoyed almost 54% of the conversation, but this time Romney reached nearly 57% of the mentioned compared to Obama.

Twitter users @Pluseonel led the way with 65 tweets, @Directorwebber was the second most frequent Twitterer with 56 tweets while @Obama_Camp_2012 and @Streetdieu were third and fourth respectively.

The most popular tweet retweeted 189 times in Iowa was from @TeamRomneyIowa saying:

THIS IS WHY YOU VOTE FOR MITT ROMNEY PLEASE RT #SHARE #RomneyRyan2012 http://t.co/DpCatrzd

During the debate in Ohio

We know about the pre-game hype but what about during the debate? Despite snap reaction polls following the debate showing a 2:1 decision in favor of Obama, Twitter in Ohio told a different story.

Although he lagged behind before the debate, Romney enjoyed more mentions during the debate with 9902 mentions compared to Obama’s 8966.

Cweiser, Islandmike13, Cincinchili and MrWajda led the way with number of tweets. Meanwhile, Jen_Tyrrell had the most retweeted tweet by far during the debate criticizing Romney saying:

During the debate in Iowa

Iowa compared to Ohio was much more active on Twitter. Maybe the extra hour helped or maybe Ohioans had already decided and didn’t take to Twitter as actively. Iowa had 12,211 mentions of Romney or Obama, just below Ohio’s total despite a much smaller Twitter population.

In Iowa, Romney again dominated the conversation with 8710 mentions compared to Obama’s 8212 mentions. Senator Chuck Grassley got in on the action being mentioned 1149 times thanks in large part to his tweets which were the most frequently retweeted.

@ChuckGrassley had the top two retweeted tweets offering running commentary during the debate:

Notice how rude Obama is interrupting many times Romney. Romney should not be so polite.

Online, Romney’s debate performance showed the greatest increase in mentions. While Obama gained much of the immediate post-debate media coverage, it seemed that Romney was the topic of conversation online, a conversation that especially inspired Iowa.

The other interesting finding is the relationship between offline influence and online influence. Well-known politicians such as Ted Strickland and Chuck Grassley quickly earn many retweets, but Twitter users that may not have the offline power have the opportunity to be even more heard and shared than these politicians.

We are continuing to monitor the Twitterverse throughout the remainder of the election cycle. Our proprietary social media monitor and deep web monitoring tools provide a unique glimpse into the electorate through the eyes of armchair pundits. If you want to learn more about big data and how you can analyze your own brand, online conversations and big data, download our whitepaper looking at how 5 Industries Are Leveraging Big Data.

BrightPlanet FAQs
Get quick answers about our technology and the web from our FAQ page.
Followon TwitterSubscribeto RSS Feed
Increasing Research Efficiency: Case Study for Big Data and Healthcare

The Deep Web and Breast Cancer Research
Scroll to top