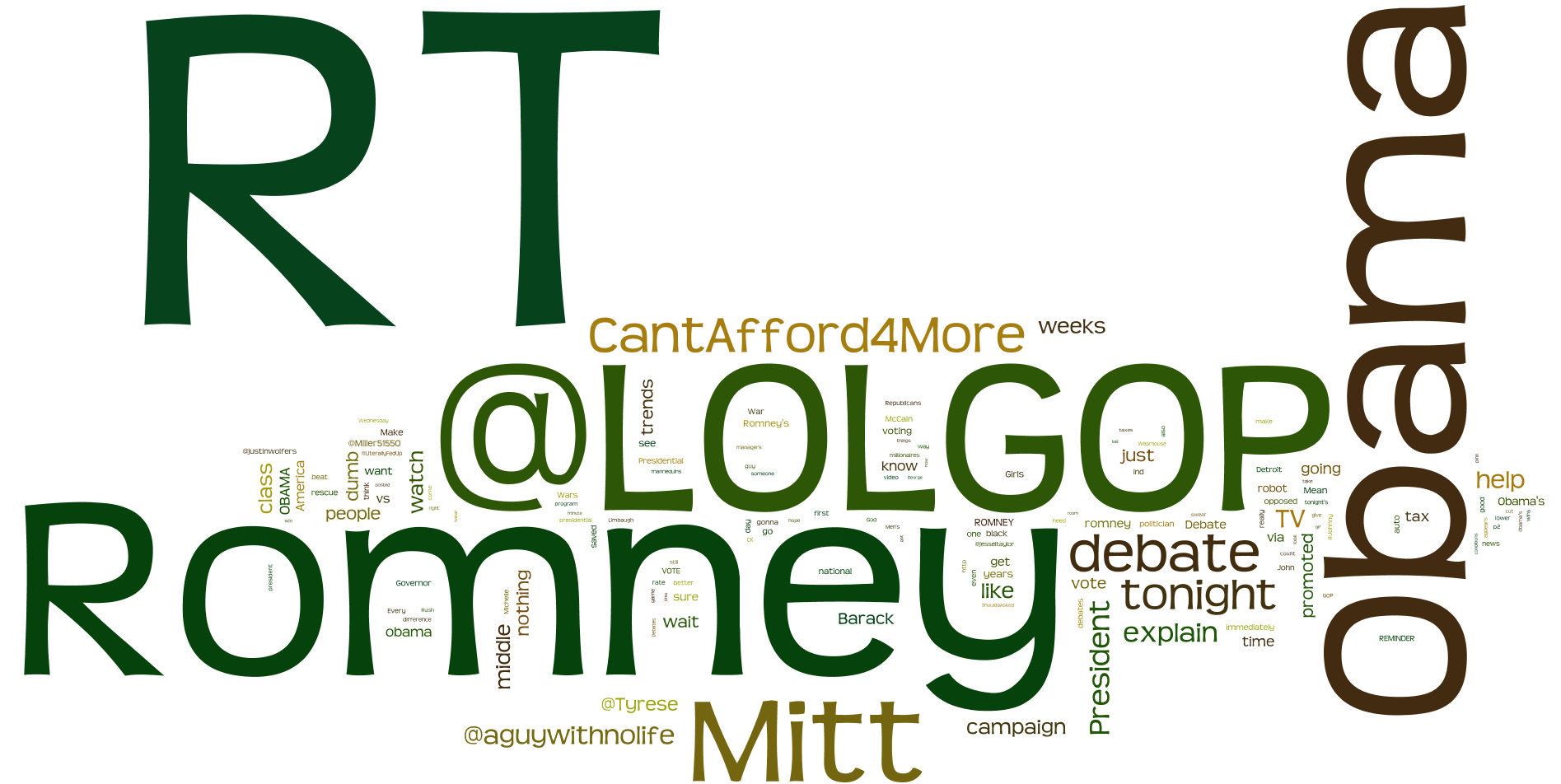 The first presidential is in the books and the post-presidential debate on who “won” is already in session.

We wanted to take a quantitative look at how the debate changed the conversation online, specifically in the swing states of Ohio and Iowa.

To do this, we used our harvesting technology to harvest and analyze all the tweets in Ohio and Iowa in the 24 hours preceding the debate. We then compared those results with the content of the tweets sent from 8pm to 10pm CST during and immediately after the debate in Ohio and Iowa to see how the debate changed the conversation.

In the 24 hours before the debate, Romney was more frequently mentioned than Obama in Ohio with 7018 mentions compared to Obama’s 5294 mentions. That means Romney had a 57% to 43% advantage in quantity of mentions.

Within those mentions, however, the critical GOP twitter account @lolgop was the most frequently mentioned word (besides Romney and Obama) in the Ohio tweets with 5924 mentions. The hashtag #cantafford4more, which is promoted by the Romney campaigned, was mentioned 1390 times.

We also looked at what domains were most frequently linked to within tweets mentioning Obama or Romney. Tweets using the word Romney linked to 829 external links. The most popular links were: YouTube (63 times), Huffington Post (45), CNN (29), Instagram (23) and Think Progress (21).

Let’s take a visual look at the most frequently mentioned words in tweets containing the words Romney or Obama during the 24 hours before the debate:

Within the Iowa tweets comedian Mike Birbiglia, @birbigs, from nearby Omaha was the third most commonly word used after Obama and Romney. Iowans were apparently upset with the volume of the election and complained using the word shouting 211 times with Obama or Romney.

A word cloud shows what Iowans were talking about the 24 hours before the debate:

Ohio during and after the debate

During the debate and immediately after from 8pm to 10pm CST, over 9000 tweets in Ohio mentioned the word Romney or Obama (9288). Obama gained an edge over Romney in quantity of word mentions with 5080 mentions compared to Romney’s 4593 mentions, a 52.5% to 47.5% advantage.

Iowa during and after the debate

In Iowa there was a high velocity of tweets with 7065 tweets using the words Romney or Obama. Romney edged out Obama in terms of number of mentions with 4532 compared to Obama’s 4324, a 51% to 49% share of mentions.

375 unique domains were linked to by tweets mentioning Romney. YouTube led the way with 30 unique links followed by: Patch.com (24), Huffington Post (19), Facebook (11) and the Washington Post (9). Tweets using the word Obama linked to 408 unique domains. YouTube again was most popular with 23 unique links followed by: Patch.com (23), CNN.com (12) and Breitbart (11).

Of all the tweets mentioning Romney and Obama, Twitter user @SouthernRow was incredibly popular, just as in Ohio. In just two hours @SouthernRow was mentioned 2870 times in Iowa with the word Romney or Obama. Mike Birbiglia also was popular during the debate (just as he was before the debate) sharing comedic relief and promotions for his upcoming movie 1060 times. Take a look at the most frequently used words in the word cloud:

How the debate changed the conversation

According to Twitter, Ohio and Iowa were associating different words with Romney and Obama before the debate but the conversation became remarkably similar during the debate. @SouthernRow was popular in both states as was the phrase “keep going.” Mike Birbiglia was noted mostly in Iowa near his home in Omaha while Ohio used the word shit more than the polite Iowans.

In Ohio Obama grew his Twitter presence dramatically, growing from a 43% of tweets mentioning Obama or Romney before the debate to 52% during the debate.

In Iowa however, Romney grew his visibility from 47% of tweets mentioning Romney or Obama before the debate to 51% during the presidential debate.

So who won? The debate continues and we’ll keep measuring for a full 24 hour period to see how it compares.

Subscribe to our blog to get the results emailed to you and check back to see how future debates change the conversation on Twitter and on the deep web that we specialize in monitoring and harvesting.

Want to monitor and gain insight from the deep web? Request a free demo to learn how BrightPlanet can help you create understanding from big data.

BrightPlanet FAQs
Get quick answers about our technology and the web from our FAQ page.
Followon TwitterSubscribeto RSS Feed
Monitoring Unstructured Data: A Case Study for Big Data and Finance