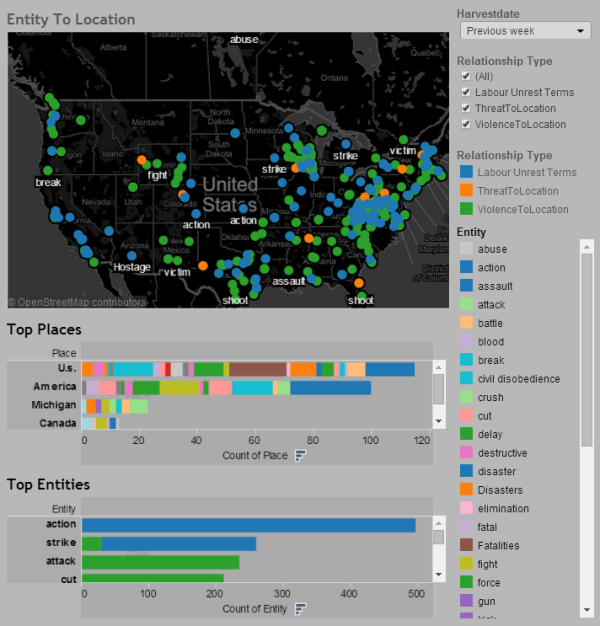 In January, we announced the launch of a new product line called Deep Web Data Feeds. The launch of the new product brought with it the ability to start using our first data feed, the Global News Data Feed, for the ingestion of news data.

The current race for the 2016 Republican Presidential Nomination is starting to heat up with many candidates indicating they may throw their hat in the ring. No one currently knows who will get the actual nomination for the 2016 election as pollsters vary drastically on who is in the lead. One thing is for certain though – data can be used to give an unbiased look at who is talked about most and whose doing the talking.

To help answer these questions, we turned to our Global New Data Feed and Tableau to help visualize the data in an easy-to-read format. The following visualization gives you a way to view the data from the Global News Data Feed as it relates to the 2016 Republican Nomination.

If you need additional explanation of the visualization, use the guide below:

Let’s first take a look at the mentions of each individual over time. The X axis refers to the date in the last three months and the vertical axis represents the number of articles that an individual was mentioned in on that day. Each color represents the name of the individual or nominee being mentioned.

We also break up the visualization into mentions by individual domain allowing you to see whose talking most about which candidates. Once again, the color represents the name of the individual being mentioned.

If you want to get a quick overview of total mentions, the tree map on the visualization dashboard can show you who has been mentioned most and their unique counts.

The articles show which news stories we harvested that contain that specific candidate’s name. You’ll see the title of the article, the URL associated with that article, the names of the potential nominees mentioned, and finally, a color box determining if that mention was a positive (green), negative (red), or neutral (gray) mention. Hover over the colored box to see more information and details about the article and even a direct link to the actual article.

Want to learn more about our Data-as-a-Service (DaaS)? Request a demo or free API access below.